If you're in a rush, here's a link to jump to the important stuff as listed in the title.

I do a good amount of thrift store shopping.

Months ago, I find this long, blue unit by itself. Luckily, I also found the power cable and the mini-USB connector for it and picked it up for $10. I figured it was about time to start scanning and digitizing old photos, and this would be much more convenient than a flatbed scanner.

I've yet to actually digitize those photos, as of now.

The scanner hasn't left my mind, though, and a few weeks ago I decided to give it a proper test run with some pages. 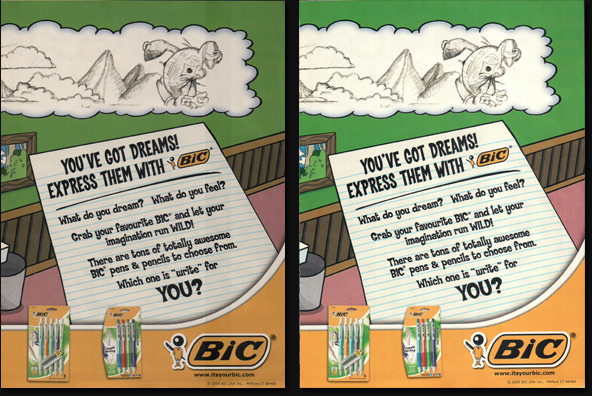 (Attached is a scan of the same page, before and after calibration with my custom sheet. Note the dark vertical band about 3/4ths of the way across the first page. Other than resizing and putting the two images together, no post-processing was done on them.)

I did tests with some old photos previously, but the color banding only showed up with large documents.

Unluckily, my thrift purchase happened to not have any of the additional accessories that would normally be included, including a photo sleeve, a cleaning tool, and importantly, a calibration sheet.

I've searched a good amount for some replacement sheet for various Pandigital models that matches this one, but other than the original manual (containing a small image of what a calibration sheet would look like), I've come up with nothing.

I mean, if someone already did put up a copy of the thing, I wouldn't be writing about this, right?

As a last-ditch effort, I ran through Google Images for "scanner calibration sheet", and this showed up 14th in the list: 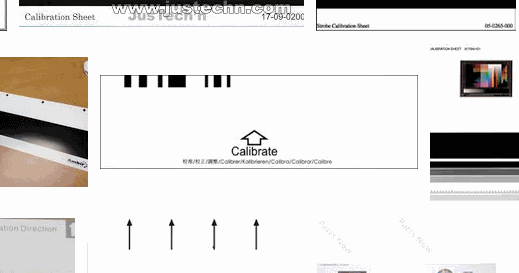 Looks exactly like what I've been looking for the entire time. Except it's at such a pitiful resolution to print properly.

No matter. Printed it out with the laser printer (which was also a pick up from a thrift store), scanned it in, and the scanner actually did something other than the straight-feed that it usually does. It actually calibrated itself.

Took the barcode, redid it in a higher resolution suitable for clean printing, got that copy to recognize as a calibration run, fixed some issues with the scan going failing to crop, and now I have a scanner that works nicely again.

I'm providing a printable copy of the calibration sheet so nobody has to run into issues trying to fix up some hardware from a company and support service that doesn't exist anymore.

The important stuff as listed in the title

Below is a replacement calibration image for the Pandigital Personal Photo Scanner Converter, model number PANSCN06, or maybe the Doxie One, which seems to share the same hardware (the design is the exact same). Wink. It theoretically should work with the PANSCN05 after being trimmed down, too.

Right-click on it and save it as a file, or grab the vectorized PDF version.

Disclaimer: This image and instructions are provided "as is", without warranty of any kind, express or implied. I make no guarantees that this will work as expected.

The calibration image is released under public domain, or alternatively CC0 for jurisdictions that do not recognize public domain.